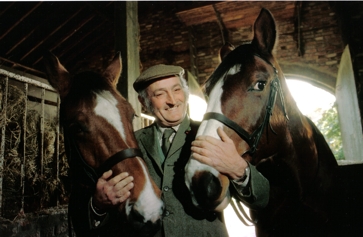 This article in our series of portraits of singers and musicians from East Anglia is contributed by co-founders of EATMT, John and Katie Howson, who knew Tony Harvey as a singer and friend for nearly thirty years. When the East Anglian Traditional Music Trust was founded six years ago, there was no more natural person to invite to be the patron than Tony Harvey.
Tony was born in 1937 at Braiseworth, near Framlingham, and lived within a mile or two of this area all his life. His family owned and managed land and farms around the area, and Tony himself was interested in supporting old-fashioned concerns such as the small farm at Bruisyard where he held a memorable weekend of horse events and music in the mid 1980s. In the 1990s, when the historic King’s Head pub in Laxfield (locally known as the Low House, and home to many an unscheduled sing-song or tune-up over the years) was threatened with closure, Tony was instrumental in reviving it as a traditional pub where music was always welcome.
We first met Tony around 1980, when Fred Whiting (see Personal Portrait No. 5) took us to Brundish Crown, where Tony would sing a song or two during the evenings of music, stepdancing and singing. He later introduced us to many other singers, and used to arrange sessions in the Hare and Hounds in Framlingham, where landlord Jimmy Finbow presided over a bar where the fixtures and fittings hadn’t changed for decades.
Tony sang a wide range of songs, including ballads such as Caroline and the Young Sailor Bold. He enjoyed telling the tale of how he had learned this song from an old lady called Mrs. Wright in Tannington, who had learned it when a small child from the village shop-keeper Mrs. ‘Besom’ Bloomfield, who had then been in her eighties. Tony also had a couple of more light-hearted songs and sentimental songs such as The Convict’s Song, which he had learned from Billy List from Brundish. Perhaps the song you were most likely to hear him sing was one evidently very dear to his horseman’s heart: Rattling Old Grey Mare.
In the 1980s and 90s, Tony was a regular at the Old Hat Music Nights in Debenham Red Lion and Cherry Tree and Stradbroke Queen’s Head and was frequently part of the Old Hat Concert Party on their outings around the country to the National Folk Festival, Sidmouth Folk Festival and Whitby Folk Week amongst others. The week in Whitby in the company of Ted Chaplin and Font Whatling was quite riotous and Tony enjoyed himself so much, that a couple of months afterwards, he invited us all to a thank you party on board a boat that cruised gently up the River Alde while we sang and ate to our heart’s content! On another Old Hat Concert Party outing to the Chestnuts Festival in London, we had a coach load of people waiting outside Mendlesham King’s Head at 9am on a Sunday morning. Time passed, still no sign of Tony and Ted Chaplin. Eventually, someone went into the pub, and there they were, two ‘John Turners’ (a half-pint of beer topped with a gin) on the bar in front of them, which were evidently not the first ones of the morning!
Tony was a most convivial man, a man of many interests and talents, and known to people in many different walks of life and in many regions of the country. He raised money for charities through sponsored horse-drawn drives through the centre of London and to Appleby Horse Fair in Cumbria, judged horses at competitions all over the country, rode with all the mounted packs in Britain, had an incredible collection of horse-drawn vehicles including a number of beautiful Gypsy vardos, he attended society functions and hunt balls, and yet he was still at home in the pub in his traditional horseman’s suit, with a beer in his hand and a song ready to be sung.
Click here for a “Personal Portrait” of the Old Hat Concert Party.
Photo: East Anglian Daily Times