This project forms part of EATMT’s research into Ralph Vaughan Williams’ collecting in the East.  For more information see the page RVW in the East.

For the research findings on the North End Voices Project and the text for the subsequent exhibition, including research into Vaughan Williams in Kings Lynn, click HERE.

The North End Voices community project ran from 2005 to 2007, starting life as part of the 2005 Norfolk Playback project, with a workshop and short performance of songs collected from the fishing community of the North End of King’s Lynn.

In 2006, we worked with the Churches Conservation Trust to teach some of the songs to local schoolchildren, as part of a Fishing Heritage Festival held in the town.

In 2007, we were approached by BBC Radio Norfolk to be involved in an oral history project, and we ran an adult workshop and more schools workshops, and carried out further research into the singers and songs, which was presented in an exhibition at the True’s Yard Fishing Museum. Norwich based singer and teacher Alan Helsdon worked wonders with four local primary schools, and got them singing both lustily and tunefully! Chris Coe worked with adults in a one-day event looking at songs sung by the local fishermen. In the evening of the same day, these brave souls then performed the four songs live to a packed audience in the soaring chapel of St Nicholas, where the fishermen and sailors used to worship, as part of a very moving community concert.

The children’s songs were filmed for a feature on the BBC Radio Norfolk website, which may be viewed here.

The text from the exhibition and booklet is now online: North End Voices research.

Alternatively, the research findings and photographs used in the exhibition are available in a small booklet entitled North End Voices, available for £4.00 including postage and packing, from the East Anglian Traditional Music Trust, The Old Stables, Museum of East Anglian Life, Stowmarket, Suffolk IP14 1DL.

Latest News:
Further research into singers in King’s Lynn in the 1950s and 60s was presented at the Traditional Song Forum meeting in King’s Lynn on 11th October 2014. This has now been added as Appendix 3 and 4 on the North End Voices research page. 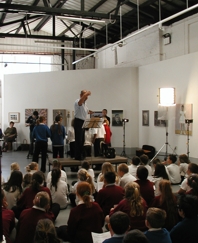