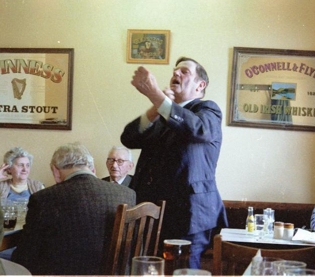 Ted Chaplin (1914-1998) was a larger than life singer from Suffolk. Katie and John Howson, co-founders of EATMT, met him in 1981, and became firm friends, taking him on many outings across the country with the Old Hat Concert Party throughout the 1980s and ’90s.
Ted was born in Eye but moved around central Suffolk quite a bit, living for some time in Barham, just north of Ipswich, where he worked as a horseman and farm manager, then in Bacton near Stowmarket where he operated a coal business for twenty years. After retiring he became a much valued and loved member of Tony Harvey’s team of carriage drivers operating from Tannington Hall, and was a frequent sight driving a pony and trap around Dennington and Laxfield, where he was never averse to stopping in at the pubs!
Ted was never backward in coming forward, and indeed the first time we heard him sing was when the television cameras were rolling in Brundish Crown in 1981. Ted sang a lot in his younger days, but had a break for nearly thirty years, when it seemed no-one wanted to hear the old songs.
“Well we used to get down to old Redlingfield Crown: what else was there to do? There was an old boy there used to come and play the accordeon: Wallie Harpy … one night his boss came in and we said ‘Come on Wallie, strike up!’ But he wouldn’t play in front of his boss, so that’s when we
started singing a song or two. The first song I ever sung in there was Nelly Dean, and I haven’t sung it since!”
The song he sang in Brundish Crown was The Fella that Played the Trombone and was typical of Ted’s repertoire. He had many funny songs, which he delivered in a very deadpan style, but the audience were never in any doubt as to his sense of humour! In a pub session he sometimes entertaining the crowd during an instrumental break by dancing with his coat hooked over his arm, like a partner. He learned most of his songs from hearing other singers: “I could hear a song once and sing it the next night,” he said of his early singing days. He learned one or two items, such as Is Izzy Azzy Woz? and Fellas in Love, (or Knock at the Door) from recordings made in the 1920s, and also had some older songs such as The Herring’s Head and The Oak and the Ash, which he had learned from singers in the Redlingfield Crown.
As a member of The Old Hat Concert Party Ted reached a new and appreciative audience across the country, and particularly relished his trips to Sidmouth and Dartmoor Folk Festivals, where he once ended up being the anchorman on a tug-of-war team, complete with a donkey he had released temporarily from its job giving rides round the field! Ted was never more at home than when in one of his local pubs: “I always reckoned to get three pints for a song: one to sing and two to shut up!”
Click here for a “Personal Portrait” of the Old Hat Concert Party which now has links to some videos of Ted singing.
Photos: John Howson