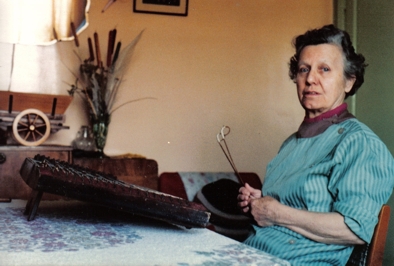 This article in our series of portraits of singers and musicians from East Anglia is written by John and Katie Howson, co-founders of EATMT, who first met dulcimer-player Mollie Whittaker in the late 1970s, and kept up a friendship with her for twenty-five years, until her death in 2004, aged 84.
Mollie lived all her life within a few streets of where she had been born in Wells-next-the-Sea, a small port and holiday resort on the north Norfolk coast. She played a small north Norfolk style dulcimer, which she inherited from her father Jimmy Rutland (from Sheringham), and which is thought to have belonged to her great grandfather as well. We first met her in her bungalow in Knitting Needle Lane, where the dulcimer was kept under the bed! With some encouragement, and many protestations along the lines of ‘Oh, I can’t play like that Mr Bennington!’ Molly got the dulcimer out of its case, which had been made by her husband Dick. John set his recorder up, and suspecting that such an apparently reticent little old lady wouldn’t play very loudly, he set the levels quite high. The indicators on the dials suddenly hit maximum, as we became acquainted for the first time with Mollie’s lively playing style! According to dulcimer researcher David Kettlewell, her beaters had been made for her by Billy Cooper, but she found the red wool covering too quiet, and used string instead for a more striking sound.
Mollie occasionally played in pubs such as the Bowling Green in Wells – her father had frequently played in a number of the pubs around the town, including the Ship, where dulcimer players Billy Cooper and John Youngman also played – but she also regularly entertained for local clubs and
parties. Her repertoire largely consisted of popular songs, interspersed with the occasional step-dance tune and waltz. Her style was actually quite complex, as she played the melody mainly with the left hand whilst playing an accompaniment with the right hand beater.
She enjoyed herself hugely on the outings we shared with her, and particularly enjoyed meeting her dulcimer hero, Billy Bennington and other performers such as Cyril Barber during a dulcimer event in Suffolk in the mid 1980s. Although she didn’t play much in latter years, she enjoyed a yarn and a chance to listen to the old music. The last time we heard her play was probably in Norwich in 2001, when she sat alongside Reg Reader and had a play of his dulcimer.
Photo: John Howson