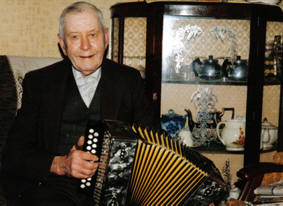 This article in our series of portraits of singers and musicians from East Anglia is written by John and Katie Howson, co-founders of EATMT.
Cecil Pearl was born at the beginning of the twentieth century and was in his eighties when we met, played with and recorded him in the 1980s. He lived, worked and played music in the villages north-west of Ipswich. His working life started on his father’s farm in Henley, operating a steam threshing machine, and his last home was only a couple of miles down the road, in Claydon, just outside Ipswich.
He had an unusual repertoire of tunes, mainly polkas and marches, which he played in a rhythmical yet understated style in the key of C on his two-row B/C melodeon. If you were in a pub and walked behind Cecil, with his cap and coat on, you wouldn’t guess that he was the one playing the music, as he hardly moved when he played, using the bellows in a very economical manner.
In his younger days, Cecil played in many of the pubs around the area: Coddenham Duke’s Head, Witnesham Barley Mow and Swilland Half Moon, where he met up with other musicians including Charlie Rookyard from Helmingham and Tom Bayham from Otley. He sought out the best of the local players such as Alf Peachey, whom he would find playing at Debenham Fair on Whit Monday. Cecil didn’t have names for most of his tunes, usually referring to them by the person he learnt them from. Some of them may have come from 78 rpm recordings, probably via Alf Peachey, and some standard ‘country dance tunes’ such as La Russe and Corn Riggs probably also made their way into Cecil’s repertoire in this way. He also had a very idiosyncratic take on the now well known tune Speed the Plough, which was the Suffolk Regiment’s march.
The Old Hat Concert Party were occasional guests at the Islington Folk Club in the days when it was held at the Empress of Russia pub, and we invited Cecil to come with us on one occasion. The message came back that he was pleased to be asked, but it was market day, and he always went into town and didn’t want to miss it! The wider world therefore never really got to know Cecil, although his appearance at the 1984 English Country Music Weekend in Mendlesham did bring him a new appreciative audience.
Incidentally, the musician Charlie Rookyard features in two of George Ewart Evans’ books (”Where Beards Wag All ‘and ‘Spoken History’) and Ewart Evans mentions that he played the ‘accordion’ (most older players used this name to refer to a melodeon). We believe some tape recordings were made of Charlie. We would love to hear from anyone with any further information about him – full name William Charles Rookyard, 1889-1965, Helmingham.
Photo: John Howson