Ralph Vaughan Williams, the quintessential English composer, based many of his compositions such as Lark Ascending and Norfolk Rhapsody on tunes from the English folk tradition. In 1903, aged 31, he started to go out and listen to an older generation of ‘traditional’ singers – mainly farm workers – and collected hundreds of folk songs by noting them down by hand.

This page contains the most recent research (2016) carried out into his visit to south Norfolk in December 1911.

In his notes, Vaughan Williams locates the workhouse, pubs and homes he visited as ‘near Diss’ – a small market town halfway between the two big regional centres of Norwich and Ipswich. He was accompanied on this visit, as on several others, by his friend and fellow folk song collector – and a somewhat lesser known composer – George Butterworth, whose notes have proved invaluable to this research. The actual locations turn out to be well outside of Diss itself, and the two men were there for three days, 19th, 20th and 21st December 2011.

Some of the songs they collected were published in ‘The Penguin Book of Folk Songs’ in 1959. To find out more, we looked at Vaughan Williams’ and Butterworth’s own notes (held at the Vaughan Williams Memorial Library at Cecil Sharp House in London, the headquarters of the English Folk Dance and Song Society) and carried out extensive genealogical research into the singers themselves.

If you are a family member and would like to know more about a particular person, please just ask – email is easiest.

On Tuesday 19th December 1911, they visited the workhouse (Pulham Union, about 5 miles north of Diss), a pub called the Horseshoes on the border between two villages, Gissing and Tibenham, and also met some other singers ‘near Diss’.

On the second day they visited two other men with songs in the workhouse, an unnamed inn in Tibenham – probably the Boot Inn in Long Row – and the Scole Greyhound.

On their last day they revisited the Horseshoes and then moved onto Southwold on the Suffolk coast to revisit a singer they had met the previous year, William Hurr. The Blyth Valley Voices page on this website has the full story of the Southwold singers.

We have now positively identified all the singers from this 1911 trip to south Norfolk, some of whom were named only by their surname in the song collector’s notes.

If anyone has any further information or photographs, we would be very pleased to hear from them – just drop us an email.

The Singers and their Songs
The song links will take you directly to scans of the original notes, held by the Vaughan Williams Memorial Library website and digitised through the English Folk Dance and Song Society’s project ‘The Full English’.

(RVW) after the song tile indicates that the transcription was made by Vaughan Williams and (GB) indicates that it was made by George Butterworth. Most songs were actually written down by both of them, but we have tried to choose the clearer or more comprehensive version to link to.

Anyone particularly interested in Vaughan Williams’ transcriptions should visit the Full English archive.

Tibenham and Gissing
Noah Fisher (1849-1940)
Two songs were noted down from Noah in the Horseshoes. Noah was a farm worker who lived on Long Row all his life. He probably worked for Henry Brewster at Waterloo Place, a small farming hamlet of about ten households in the late nineteenth century (and now a luxury “retreat”!).

Local newspapers reveal a few details: in 1881 he was found guilty of possessing a gun without a licence – there were clearly suspicions that he used it for poaching, but he said he had tried to use it for killing rats but it hadn’t worked. He was fined £1 or 14 days’ hard labour – we don’t know which option he took.

In 1882, perhaps a bit more wary of the long arm of the law, he placed an advertisement in the Diss Express, stating that he had found a stray black retriever dog.

By 1900 he was definitely on the ‘straight and narrow’ as he won a ploughing match in nearby Winfarthing, with a prize of a copper kettle and 3s 9d.

In the light of these very few details about his life, the selection of songs noted down from his is remarkably poignant:

The Poacher (Hares in the Old Plantation) (RVW) and
The Team Boy (GB).

Noah’s words to this song are so very apt to his own life:

Blue Fisher
By process of elimination, this must have been Noah’s older brother James Fisher ( 1835-1912). He was also a farmworker, who was born at Waterloo Place and lived his entire life there, working on farms in the neighbourhood. Censuses show the number of men employed on the Waterloo Farms diminishing through the late nineteenth century, and evidently James had to travel a little bit further to work sometimes: his only appearance in the local press is regarding a dispute with his then employer, Robert Mullenger who farmed about a mile to the south, on the edge of Burston. The dispute hinged on whether the contract was a weekly one or a casual one and Mullenger was particularly annoyed because James Fisher had left him in the lurch at Harvest time.

He sang (in the Horseshoes):
Bonny Robin (GB)
Jockey to the Fair (GB)
The Horse Race Song (GB)

Some of these songs were published in 1977 in the E.F.D.S.S. publication ‘Ploughboy’s Glory’, edited by Michael Dawney.

Harry Last (1861-1934)
Harry Last grew up in the Heywood area of Diss, where he kept the Rampant Horse pub from about 1896 until he took over as landlord of the Gissing Three Horseshoes in late 1911. Vaughan Williams and Butterworth noted down in Horseshoes Noah and Blue singing:
Sweet Primroses (RVW) and one of these men, or possibly someone else, also sang
The Barley Mow (GB) – a song almost always sung in a pub, for obvious reasons!

The words noted down by Vaughan Williams and Butterworth are a slightly quirky take on the usual set. The song is cumulative, the entire last verse is given here: 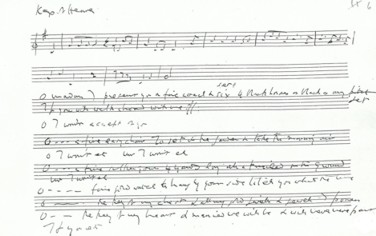 Only George Butterworth even wrote down a surname for the man who sang
The Keys of Heaven (GB)
in a pub in Tibenham on the first evening of their visit; the same man may also have sung
The Yorkshire Bite (RVW).

The singer must have been one of two brothers – either Isaac (1853-1928) or Ephraim (1860-1923) Woods. They were both farm workers who grew up in Wymondham but were living in Tibenham in 1911. Isaac lived next door but one to the Boot Inn – the “pub” may possibly have been the Boot, or the Horseshoes where they went on subsequent days.

Mr Tufts senior was a farmer and poultry dealer in Long Row, and in 1911 he was widowed, aged 82, and his unmarried son aged 55 was living with him. Vaughan Williams’ visit seems to have been to their home rather than in a pub, possibly because the two men were farmers rather than farmworkers and maybe for that or other reasons, did not frequent the pub.

An interesting aside, is that four of William senior’s brothers emigrated to Ontario in Canada where they founded a settlement know as Tuftsville.

Pulham Market workhouse
Vaughan Williams and Butterworth also made two visits to the local workhouse, an imposing building standing right on the main Ipswich to Norwich road, a couple of miles east of Tibenham.

The Depwade Union workhouse was built in 1836, following the Poor Law Act of 1834 and doing away with the various small work houses in Diss, Gissing, Pulham, Dickleborough and Scole. It remains an austere building, designed to hold up to 400 people in four wings. Some of the exterior walls have gone, but the main part of the original building still exists, now divided in to apartments after a spell as “Beadle’s Hotel”.

Jonas Stevenson (1834-1916)
Jonas Stevenson lived and worked all his life in Carleton Rode, north west of Diss. His father kept a small farm and Jonas was a farm worker himself.

In April 1866, Jonas appeared in the Long Stratton petty sessions, accused of setting fire to his father’s barn, stables and cartshed. What the outcome was is not entirely clear – in August the case appeared in the Diss Express under the heading ‘Ignored Bills’ – presumably the case never actually came to court for lack of evidence. The same newspaper also reveals a couple of occasions in later years when Jonas was fined for drunk and disorderly behaviour. He was resident in the workhouse by April 1911.

David Took(e) (1839-1916)
David Tooke was born in Fritton, on the edge of the Broads, but had lived in Pulham Market since at least 1871, when he was lodging at the Crown public house. He married quite late in life and only a few years later was widowed and living in the workhouse by April 1911.

He sang:
The Bonny Blue Handkerchief (GB)
The Molecatcher (GB)
The Rose of Britain’s Isle (GB)

An 1898 account from the Diss Express of an entertainment in the workhouse mentions a Mr Dade (who was not an inmate at the time) as a singer – whether or not this was the same man is not known.

Scole
A little to the south, at a major crossroads in the region, lies the small town of Scole, well known for the large coaching inn the White Hart. A little less well known, but never-the-less a busy pub at the heart of its community at the time, was the Greyhound, where they called in on 20th December.

John Woodcock (1835-1914)
John Woodcock was landlord of the Greyhound from 1891-1904. He was also a blacksmith and had previously combined the two trades at the Brewer’s Arms in Scole and maybe elsewhere.

He sang:
Trot Along (RVW)
The Sowing Machine (GB)