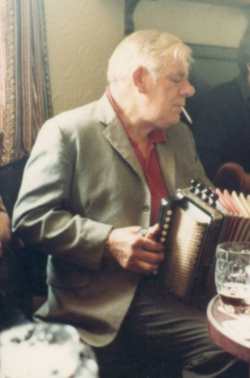 The first in a series of portraits of traditional singers and musicians from East Anglia, written by people who knew them and are now carrying on their traditions. The first is of the iconic Suffolk melodeon player Oscar Woods from Benhall near Saxmundham.
Written by Roger Digby, anglo-concertina player and founder member of the influential English band Flowers and Frolics.
first heard Oscar Woods on Topic’s ‘English Country Music from East Anglia’ and first met him in 1976 at the original English Country Music Weekend. He was a quiet unassuming man in apparent contrast to the strong confidence of his music. He played seated with his knees together, the melodeon loosely placed on his lap allowing bellows movement at both ends. Invariably a hand-rolled cigarette hung from his mouth, the ash getting longer and longer until it seemed it must inevitably fall into the folds of the bellows. The fact that the ash held on for so long is a mark of the extraordinary stillness of Oscar’s playing position. He did not pump the bellows vigorously with waving arms but employed a remarkably short ‘travel’ much more like Irish players; yet this bellows control was one of his great strengths. 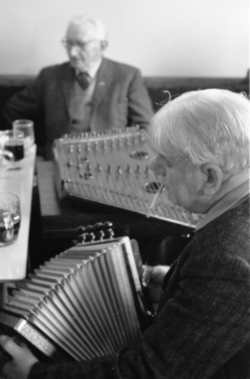 The one-row melodeon does not allow much in the way of variation in melody. The keyboard offers only the basic notes of the scale and the two-chord bass offers Hobson’s choice of take it or leave it, but, like every double action free reed instrument, there is huge rhythmic potential in the use of the bellows and Oscar excelled in this. Setting an unerringly correct pace to begin with, he then added dotted notes and semi-quavers within this rhythm to produce a spontaneity and tension that added a thrill to even the most familiar of tunes. His untitled jig (now known universally as Oscar’s Jig) has a remarkable syncopation and the great number of players who now play this jig across the country have all found slightly different ways of managing this, invariably smoothing it out. Oscar’s version remains unique.
I first met Oscar for an informal session in Suffolk one Saturday night in the Hare and Hounds in Framlingham. I arrived on time, having not yet learnt that Oscar was always late everywhere. There were two men in the pub sitting either side of the fire on painted benches nailed into the wall. One, the landlord, served me a pint of mild, the only draught beer available, and I sat at a table. Inevitably my unusual presence eventually lead to the enquiry of why I was there. When I mentioned Oscar Woods, their faces lit up with interest. ‘Oscar’s coming tonight,’ they repeated to each other and this information was immediately relayed when a new customer arrived. This was important news! By closing time the small bar was a cheerful, crowded scene with step dancers rattling the flagstone floor in ones and in pairs and I had observed a traditional musician genuinely at work, playing for the entertainment of a local community. Someone recently referred, in an EFDSS publication, to Oscar Wood’s ‘enormous repertoire’. This is quite wrong. He did not have an enormous repertoire; yet he had all he needed. Hornpipes for the stepdances, some polkas and waltzes for the couple dances, a set for the Veleta and enough popular songs to get some singing started, these latter often rendered into strict waltz tempo to provide a double purpose.
Oscar was the consummate traditional musician. He played for his audience, providing functional music for their needs and his playing had developed to the very greatest heights of his instrument. Anyone who listened to him with their ears open enjoyed a tremendous experience.
Click here for a “Personal Portrait” of the Old Hat Concert Party with whom Oscar visited folk festivals around the country in the early 1980s.The page now includes links to some video footage featuring Oscar playing with the Old Hat Concert Party in 1983.
Photographs: John Howson