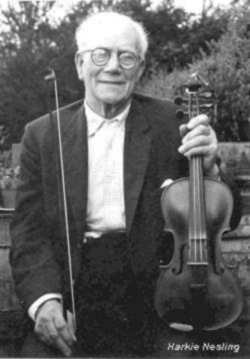 This contribution to our series of portraits of singers and musicians from East Anglia comes from Keith Summers, who recorded many traditional musicians in the area in the 1970s, and wrote the seminal book ‘Sing Say or Pay’ now out of print but available on the internet magazine Musical Traditions. Harkie Nesling (1890-1978) was an influential fiddle player in central Suffolk.
In the early 1970s Dick Joyce’s popular programme ‘Bygones’ on Anglia TV sometimes showed brief clips of local traditional singers and on one occasion I saw a short piece of film of an elderly man playing fiddle and singing Won’t you be my little teddy bear. A few enquiries revealed that his was Harkie Nesling from Bedfield near Framlingham in Suffolk and that he was a bit of a local ‘character’. Now this is a term I discovered could carry all sorts of meanings (not all good) so it was with a little trepidation that, one Sunday afternoon, I knocked on the front door of Harkie’s cottage. But I was welcomed in as a long lost friend ‘Why, come in, dear boy!’ and seated opposite another visitor, a younger man in his mid seventies who said not a word for the next two hours.
After the customary cup of tea and chocolate biscuit I asked Harkie a few questions and as if delivering a well-rehearsed speech, he launched into a two-hour précis of his musical career over the previous 70 years. And what a C.V. it was! Born in Bedfield, his first instrument was a concertina, given to him by a friend of his father when Harkie was six, but it was not till he was 14 that, together with Walter Gyford, he began to take violin lessons from a Billy Smith in Bedfield Chapel. He acquired his first instrument two years later from a well-known old Gypsy fiddler Billy Harris of Charsfield. Harkie’s recounting of his dealings with Harris was so vivid that I was staggered when it dawned on me that they had occurred in 1905!
Harkie (short for Harcourt) moved briefly to London in 1910 to work as a wheelwright and played at night in a pit orchestra for the silent movies before an accident at work forced him to move back to Suffolk. Here after the Great War, he reunited with Walter Gyford and another Bedfield man, melodeon player Walter Read to form a country dance band. They did the customary rounds of weddings, pubs, village dances, country fetes and rather intriguingly played every Thursday (pension day) at Bedfield Post Office!
His repertoire of tunes was fairly typical of his generation: polkas, schottisches, quadrilles and waltzes, all played in a strident, unfussy and confident style on one of the four violins hanging above his mantelpiece. His song repertoire was more unusual. He knew none of the traditional country songs common to most of the local singers, but preferred sentimental and comic songs such as Just A Song at Twilight and Enoch Brown and popular songs of the late nineteenth century, some of which he accompanied with his fiddle, occasionally strummed ukelele style.
I visited Harkie regularly over the next few years and he was a delightful man, a lovable chatterbox with a good story to tell. He was infectiously cheerful despite being housebound in latter years. But he was never lonely as he had a large, supportive family and a good number of friends who visited regularly.
By the way, the other chap at my first, and every subsequent visit to Harkie’s was Fred Whiting (‘but everyone calls me Pip round here’) who was to let me, and later Carole Pegg and John Howson record over 600 fiddle tunes and songs. But that’s another story …