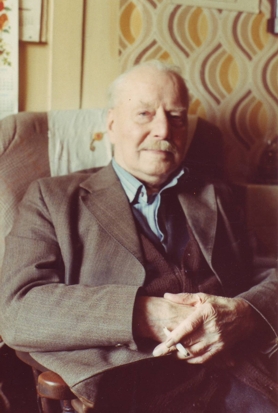 This article in our series of portraits of singers and musicians from East Anglia features singer Gordon Syrett, from Mendlesham Green, in central Suffolk. It is written by EATMT co-founder John Howson, who met Gordon in the early 1980s. At that time there were a number of old singers around the county whom John was busy recording, such as Fred Whiting in Kenton, Charlie Hancy in Bungay and Gordon Woods in Framsden. Gordon Syrett, apart from being an excellent singer, had a wealth of memories and contacts that indicated just how much traditional music there had been in the Mendlesham area.
Gordon was a wise old man when I met him, with a classic East Anglian singing style, reminding me at times of the well known Norfolk singer Harry Cox.
I was first taken to see Gordon by Elijah Parker (known locally as ‘Tinker’) who lived in the same village as me and who took me on Sunday morning sorties to his old family stamping ground, Mendlesham Green. Gordon’s cottage, with the walnut tree outside, was a regular stopping off point for us, particularly as many other locals would call in there too.
Gordon and Tinker would sit yarning about times gone by and in particular about the long closed local pub, the Green Man, just a few houses away. This pub was a hotbed of singing where Gordon met up with other local singers such as Pom Hart and Bug Stannard. Ted Thorpe, who lived at the end of Tan Office Lane, played melodeon, and it was halfway down this lane that Tinker’s family had their caravan for many years. His mother, known as ‘Ma’ Parker sang and would also give a step when Ted had wound up into a couple of hornpipes.
Gordon’s father Fred was a singer, and Gordon himself had a mixture of classic folk songs such as The Dark-Eyed Sailor, Jim the Carter’s Lad and The Jolly Ploughboy alongside late Victorian songs, written when he was a few years old, such as M-o-n-e-y and The Mistletoe Bough, said to be set in Brockdish Hall, near Harleston on the Suffolk/Norfolk border.
Gordon died in 1983, only a few months before Katie & I organised one of the English Country Music Weekends right on his doorstep, in Mendlesham. How many of those people would have enjoyed listening to him sing, and how he would have enjoyed having a new audience.
See also Village Portrait about Mendlesham.