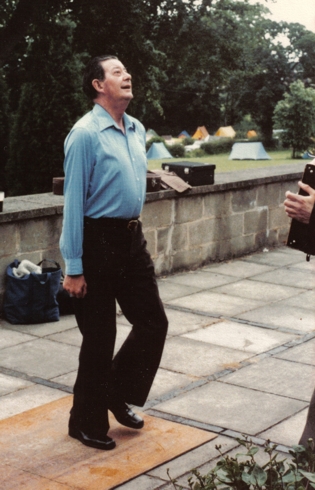 This article in our series of portraits of singers and musicians from East Anglia is compiled by Katie Howson, co-founder of EATMT. It is based on obituaries written by Peter Clifton for the English Folk Dance & Song Society in 1995, used here with their permission.
Dick Hewitt (1921-1994) was a marvellous stepdancer from north Norfolk. Katie and John Howson were introduced to him by dance researchers Peter Clifton and Ann-Marie Hulme, and he was an occasional member of the Old Hat Concert Party in the 1980s. Peter described Dick as ‘a free-phrased stepdancer who could dance to any rhythm … his dancing had a natural ease of movement’.
“I first met Dick in 1977 at his home in Melton, Norfolk. I, together with Ann-Marie Hulme, had been researching into the dance tradition of the local area. It was not a good start. Dick had been working nights at the turkey farm and we called mid-morning. We agreed to meet later in a local pub. Despite assertions that he didn’t dance any more it was very obvious that he was a natural performer. He did not disappoint. Whether in the local pub – The Green Man, Briston, or with the Davies family from Cromer or on a formal occasion, the quality of his dancing was unsurpassed. A free-phrased step dancer who could dance to any rhythm. He later danced at folk festivals and at the Albert Hall. On each occasion his approach was thorough and professional.”
“Dick learnt to step from an early age through his mother’s family, mainly his mother and uncle. He developed into a prodigious performer.”
“His father, Albert, was a fine musician who played a variety of instruments. Albert was recorded by Seamus Ennis in 1958 for the BBC radio series ‘As I Roved Out’. It was this broadcast that brought Dick into contact with the English Folk Song and Dance Society through Russell Wortley … Dick was filmed on behalf of the EFDSS in 1979 for archival purposes. He dances to three rhythms – hornpipe, waltz and march – accompanied by Percy Brown, one of the ‘old-time’ players. It was filmed in the Green Man in Briston, the pub he used as his local for several years. He particularly enjoyed dancing to a slow waltz as he felt the slower pace and the rhythm enabled him to show his dancing to the full.”
“Dick was a gregarious man. He spent 10 years as the publican of the Three Horseshoes in Briston. During this time a range of instruments were kept behind the bar. The pub was a favourite of the travellers. On many occasions, dancing, singing and playing would go on all night. Dick and his wife, Marion, were always very hospitable. Many a Saturday night was spent drinking and chatting in his local. Dick had a great sense of humour and was an inveterate optimist. He had been deeply affected by his wartime experiences, having spent a considerable amount of time as a Japanese prisoner of war. He said that he only survived the experience because he came from ‘sturdy Norfolk stock’. For me it was a privilege to know him and share an interest in the dance tradition.”
Dick occasionally joined the Old Hat Concert Party for outings around the country in the 1980s, until ill health curtailed his activities.
A longer article about Dick is available on the Musical Traditions website, written by Chris Holderness. Another article by Chris – about the village of Southrepps – features a short soundclip of Dick dancing to Harry Baxter’s fddle playing, from a 1955 radio broadcast.
The BBC recordings of Dick’s father Albert playing the melodeon were available on the now defunct Folktrax label (Folktrax 328), and may become available again.
Photo: John Howson