Some years ago we found an article called “Folk Songs from the Essex-Suffolk Border” by Dr Thomas Wood, published in the 1929 journal of the Folk Song Society (just before it became the English Folk Dance & Song Society).

In 2011, as part of the Managing a Masterpiece project, we carried out further research into the two singers, interviewing family members and local historians and using online documentary resources such as census returns, birth, marriage an death records.

Dr Wood was a composer and author who lived at at Parsonage Farm in Bures, between Sudbury and Colchester, from 1924 to 1950.

The 1929 article was interesting, because although containing only a handful of songs, it was from an area and an era where not much else was noted about folk song and the people who sang them. Wood included information about the singers and their style that were unusual to find in such articles. He collected songs from two local men, Maurice Cardy and William Sparkes, both of whom he knew well, as they worked either for him, or on the adjoining farm.

“I have spent some time during this year (1928-9) in trying to find folk-songs in the Stour Valley. The results are not large. I have so far found only two men who were able to give the tunes and texts of songs in anything like a complete form … both of them speak the beautiful north Essex dialect, with its careful sounding of the ‘h’, the softening of the ‘er’ into ‘ar’, the invariable use of ‘that’ for ‘it’ and the translation of all tenses into the present, with the plural ending …. both have some idea of singing, and were much interested in what I wanted, when I had explained carefully what I was after.”

It seems likely that his was his first, and only foray into collecting songs and his inexperience shows up when he says that he thought Cardy was puzzled by the mode of the song as he sometimes varied the tune. This is, of course, very characteristic of traditional singing, and is more about letting the story take precedence over the tune than about making mistakes and coping with these variations is a difficulty met by every collector attempting to notate from performance.

Another difficulty encountered by the collector – that of the singer not remembering every line accurately – provoked the following comment: “Time, trouble, goodwill and beer failed to produce the missing lines.”

Maurice Cardy was nearly 70 when Wood noted down his songs, and worked for him occasionally, when an extra pair of hands was needed around the place. He had been born in 1859 and brought up the only son of a farmworker, Edward Eaves, in Deadman’s Lane. By 1881, he was married and still living in the same lane, and by 1911 he had progressed to be Farm Bailiff at Chapel Farm, still in the same hamlet where he was born.

Cardy had learned The Constant Farmer’s Son and The Young Squire from his mother, whom he recalled singing them around 1870.

Through some rather tortuous research amongst the census, birth and marriage records, (which eventually showed that the adult Maurice took his mother’s maiden name) we now know that his mother, from whom he learned his songs, was Caroline Eaves (nee Cardy).

The official documents did not indicate her employment, but Wood had included the information that she was a straw plaiter. This would have been “outworking” – working at home – to help make braids for straw hats, the kind of women’s work was rarely recorded on the census, and just the type of activity that could provide women with a context for singing.

Dr Wood noted that Maurice Cardy “used gestures – stiff and awkward ones, but still definite and explanatory ones, which he said were used by his mother when she sang the song”.

At a meeting of the Bures History Society, we came across a story about the Cardy family, relating to a fire at Little Roper’s Farm, which is a matter of yards from where Maurice Cardy grew up and lived as an adult, but this too place in 1845, so would have been some of Maurice’s older relatives.

William Sparkes was initially quite hard to identify: Wood probably did not know him as well as he knew Cardy, and stated his age as 50, which caused a problem when researching him – there was no-one of the right age in the records!. After some tenacious research and some lateral thinking, we eventually identified him as a man who would actually only have been 42 in 1929, coming from a long-established family of farm workers living at Hobb’s Well, Mount Bures. In fact, some of William Sparkes’ descendants still live within a mile or so and run a farm shop locally.

We met Mrs Irene Brown, William Sparkes’ granddaughter, who remembered him singing, together with his wife Elizabeth at Christmas time, when the whole family would gather at their house and play games, sing and entertain themselves. The women and girls all slept upstairs and the men carried on downstairs, playing cards till late and then going out shooting rabbits till early morning.

Mrs Brown kindly shared some family photographs with us including the one below, and in return we gave her all the information we had about her family history.

Dr Wood commented that Donnybrook Fair was “sung by William Sparkes in the highest alto I have ever heard, with great vigour, and much emphasis was laid on the punning surnames of the old pal’s wife … the song is well known here.”

When we worked in Bures Primary School, we discovered that one of the pupils was William Sparkes’ great-grandson: he became quite a celebrity on the final day, when we were able to show him a photograph of his great grandfather for the first time, and sing Donnybrook Fair to other family members – a very moving experience for all involved.

Above: first verse of Donnybrook Fair, collected from William Sparkes.
Below: William & Elizabeth Sparkes; William and horses. Both photos courtesy of Mrs I. Brown. 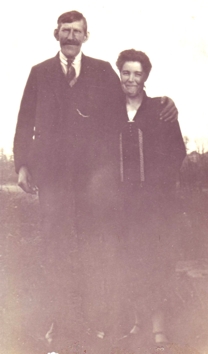 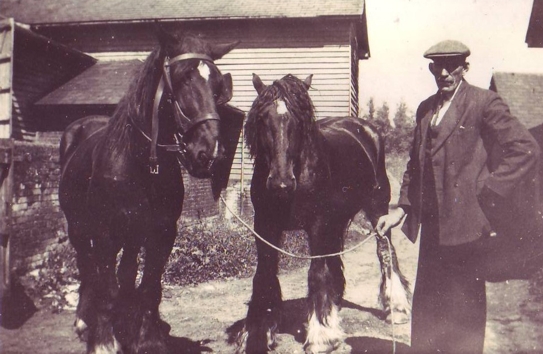 Songs collected by Thomas Wood in 1929 from Maurice Cardy:

For further information on the songs or the 1929 article in which they were published, contact the Vaughan Williams Memorial Library at the English Folk Dance & Song Society (0207 485 2206). Their website includes a fantastic comparative database about folksongs, where you can research the history of these songs.

Postscript
Neil Lanham, a well known local collector and musician collected  many songs in the area later in the 20th century.  You can find more about his work HERE.
Another Neil, Catchpole, who hails from the same area, can be heard nowadays singing songs from his family.