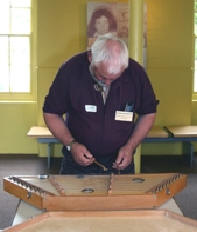 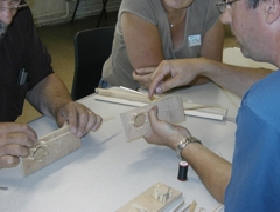 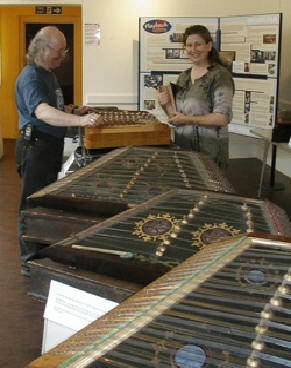 Programme of events (16th July 2005)
Display of East Anglian dulcimers
This included some dulcimers belonging to Norfolk Museums which are not normally on public display, and a number of locally-made instruments held in private hands. The Playback exhibition includes further information about dulcimers and other Norfolk musical traditions. Billy Bennington’s CD ‘The Barford Angel’ was launched on the day.
Concert spots and talks

Chris Coe 11.00-11.45
Chris orginally learned from Glaswegian player Jimmy Cooper, and has since developed her own style, using hard hammers. Chris is pictured below, second from left.
John Howson – The Dulcimer in East Anglia 12.00-12.45
Come and hear about the instruments, the players and the music. John has been carrying out research into the dulcimer as part of the Playback project, and this talk (with musical examples) outlines his findings.
Fred Woodley 2.00-2.45
Fred has a family tradition of playing and making dulcimers in the West Midlands, and plays with plectrums. Fredi s pictured below, first left.
Final concert with Reg Reader and Tom Knight 3.15-4.15
Reg and his grandson Tom carry on their family tradition from Suffolk, using wool and cane beaters. Reg spent much time playing with the late great Norfolk player Billy Bennington, and recently Tom has been playing Billy’s old instrument. Other guests will also feature in this, the day’s final concert. Reg and Tom are pictured below, far right.
Drop-in workshop
Ian Clabburn brought a collection of dulcimers for you to have a go at actually playing – even if you’ve never played anything before you were able to drop in and have a go under Ian’s guiding eye.
Players’ session
Players with their own dulcimers were welcome to join a session hosted by Richard Blake and Chris Holderness.
Cane beaters workshop
Although many modern dulcimers are played with wooden hammers, the older style of beaters, which remained popular in Norfolk, were made of cane or rattan and bound with wool. Most people using these beaters only possess an old pair, and no-one has been making them since the great Billy Bennington died in the 1980s. Through the Playback project, the East Anglian Traditional Music Trust is reviving the craft of making them, and on the day people were able to make their own pair to take away and play or just come and have a look.