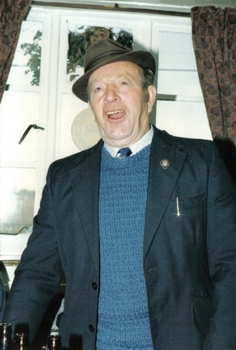 This article in our series of portraits of singers and musicians from East Anglia was prompted by attending a party to celebrate Geoff Ling’s recent birthday. The Ling family of Blaxhall in Suffolk were one of the best known singing families in the county, and recordings were made of them from the 1950s onwards. Geoff, born in 1916, was for many years the mainstay of the famed sessions in Blaxhall Ship.
When we moved to Suffolk in 1978 I was armed with heady tales told to me by Taffy Thomas and Keith Summers about the awesome singing nights they’d had in the Ship at Blaxhall. I’d also heard Peter Kennedy’s recordings of the Blaxhall singers he had made in 1953 and the LP Karl Dallas had produced called ‘The Larks They Sang Melodious’, which was recorded in the Ship and released in 1973. To me one singer stood out on these recordings and that was Geoff Ling. Maybe not the sweetest of singers but one with a twinkle in his voice. A singer who could tell a story.
We soon made a sortie to the promised land of Blaxhall and I finally heard Geoffrey (as he was always known locally) sing in person. Green Bushes was probably the first song I heard Geoff sing and he certainly lived up to my expectations. He was in his early sixties then and not only had a twinkle in his voice, but also a twinkle in his eye. We became good friends and I spent many a happy hour sitting in his kitchen listening to his stories about the old times.
Geoff told me that he started singing in pubs when he was eighteen, going around with his Dad to steel quoits games at pubs like Marlesford Bell, Aldeburgh Mill Inn and Eastbridge Eel’s Foot. But the most singing was just round the corner from where Geoff lived, at the Blaxhall Ship, and that’s where he picked up the old songs. He would meet there with his mates Cyril Poacher and Eli Durrant who were all about the same age. A lot of the old songs came from their relations but they weren’t allowed to sing them because they ‘belonged’ to someone else. So most of their first songs came off the wireless or from gramophone records, until they could take on some of the older songs as the old boys died. 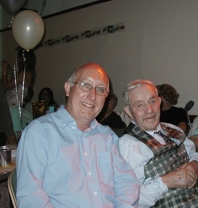 Geoff was always happy for me to take my tape recorder, when he’d “remembered another one” and sometimes he’d get out his old melodeon and strike up a tune, which we never saw him do in the pub. It is ironic and rather sad that, over the years, the number of songs Geoff could sing steadily increased as he became the last true carrier of the Ship’s singing tradition.
On 29th July 2006 a party was held at Saxmundham Market Hall to celebrate Geoff’s 90th birthday, and Reg Reader, myself and Katie were invited to play some tunes. The night was a joint party, and there was also a disco. When our turn came, Geoff visibly perked up!. Within minutes he was on his feet (albeit holding on to a chair) and giving us a step – something he’d done in the Ship many a time, and then he gave us a couple of verses of two of his favourite songs. A night to remember, and I have to say the twinkle is still there!
Photos: John Howson, Katie Howson